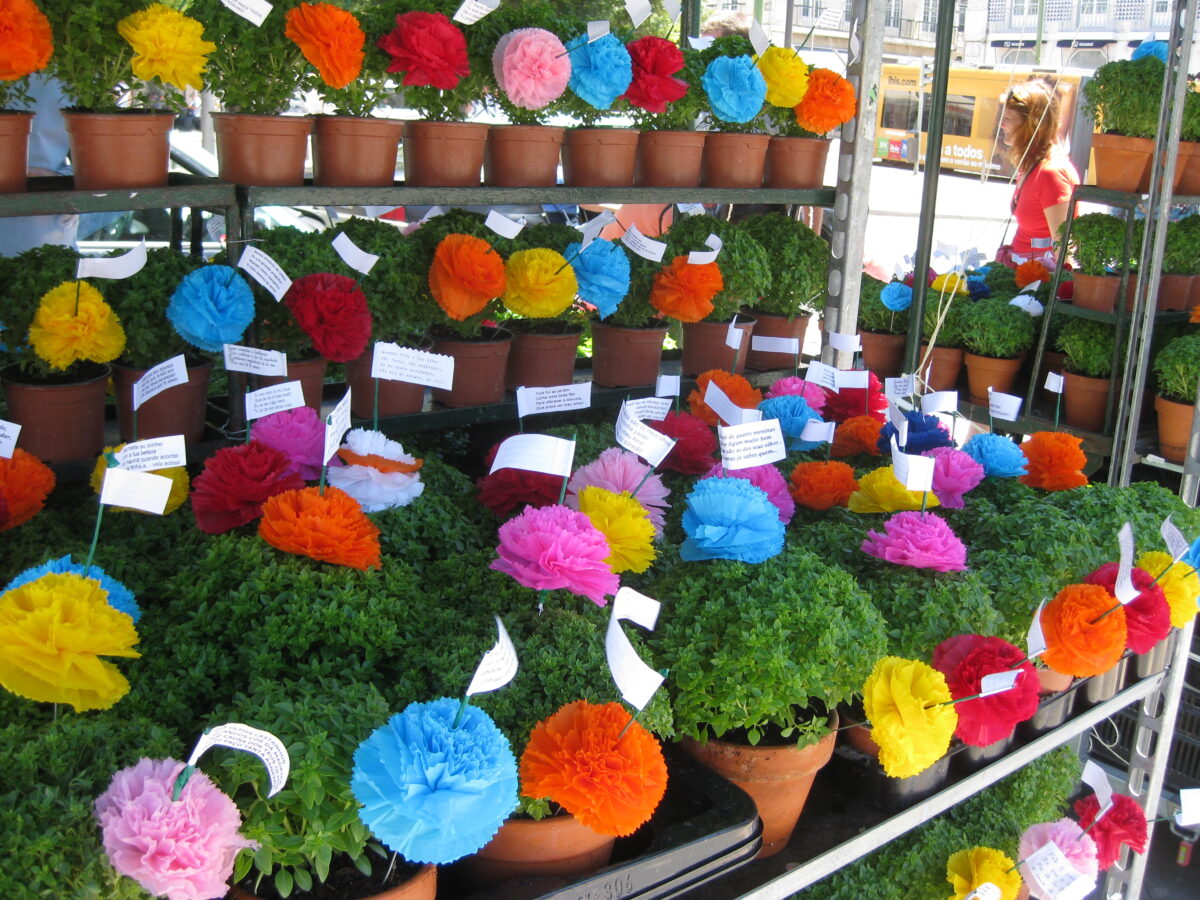 The city was actively engaged in preparations for the big festival on June 12th. We could feel it in the air, in the streets and in the shops and restaurants. 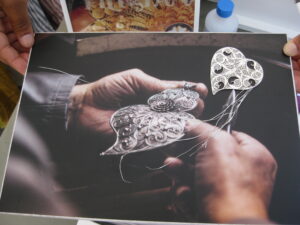 That afternoon we headed down to the open  market.  The food booths were open but no arts and crafts vendors were in evidence. I was disappointed as I really wanted to buy a small piece of the filigree jewelry I had seen at the booth I took photos of previously.

We walked around the squares but were not interested in eating or drinking, so we came back to the apartment to rest up for the evening. 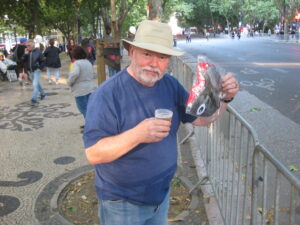 We headed out to explore and see what is going on about 7 PM.  Everyone was wearing sardine hats, basil hats and “Super-Bock” hats. I asked at a beer stand how to get. The first one apologized that he had run out of them over an hour ago.  The next stand was more helpful.  She told me to look for a fellow in a white shirt near the “Super Bock” van parked just up the street. I checked the area while Mike was people watching along the avenue.  Sure enough, there he was with crowds around him with their hands out.  I joined the crowd and was rewarded with a “basil” hat, which I stuck in a pocket. He ran out of sardine hats before I could get to him. He was headed back to his van so I followed him.  This time I was close to the front and rewarded with a sardine hat!  Mike took possession of the sardine hat. I had the basil hat. Those are the only two souvenirs we brought home. We had eaten and consumed wine to the max, but we had agreed before heading to Lisboa, not bringing home more “stuff”. 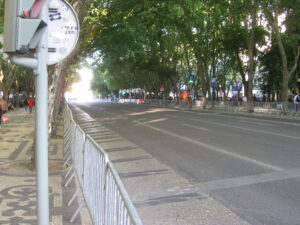 The crowds were growing larger and more rowdy as we wandered about. For days they had been bringing in and setting up viewing stands.  We were not sure if it is a first-come, first-serve to get a seat or if they sold tickets to allow one to sit there.  Since all the neighborhoods are represented in the parade, we figured if you live in a neighborhood, you might receive tickets to the stands. 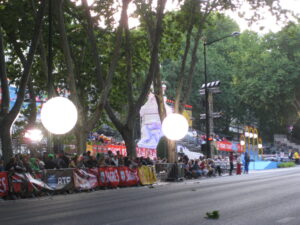 They had mounted huge lights and screens showing the crowds. After the parade, people would likely return to their neighborhoods to continue the party till early-to-mid morning of the 13th.  This was an amazingly well coordinated festival, but they have had a lot of years to perfect the process. 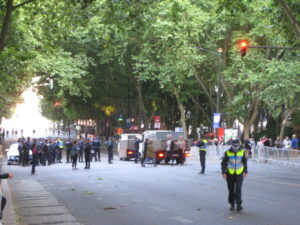 The Police were out in droves.  Some had tasers, some had handguns, some had billy-sticks and some were simply a presence.  But there were certainly a lot of them. That town means business – the business being to party on and not have trouble!

Finally, I wanted one last visit to my favorite bar, “Bananas”. I felt sad to think I would not be going back there after that evening. The people had grown to know us. We felt included in the social aspect.  The evening was spectacular.  It was warm but with a breeze that kept it from being too hot. 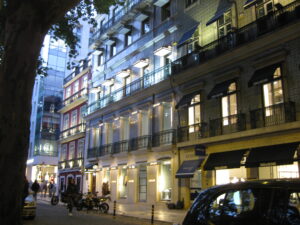 The lights of the buildings made the city glow from within. The area was crowded and every table busy.  The line was long to get our drinks and eats.  But it was worth it.  The only thing that drove us to go back to our apartment was our 3AM alarm clock to go to the airport.

All-in-all, it was not just a memorable vacation, it was a test to see if we could live there.  Our resounding answer to that question was “YES!”  For that to be the end result is years ahead of us, but we fell in love with the place, the people, the food, the wine. It is a lovely place to visit and potentially a great place to live.

Next stops – off to Gatwick and SeaTac.